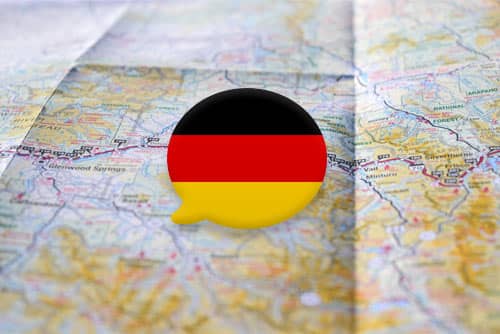 German is considered to be the language of science and its beauty lies in its words.

The German language is estimated to be made out of a total of 300000 words with the largest German dictionary having over 135000 words. This can seem a really big and frightening number to someone wanting to start learning German, but here's the good news: you only need to know roughly 5% of the total words to be fluent in German. This means that focusing your efforts on learning the most common German words you will be fluent in German in no time.

What’s even more encouraging is that knowing as little as 100 words helps you understand half of the words in an article or book written in German. Learn the most common 1000 words and you get to a 75% understanding of texts in German. Also, each new word you learn helps you guess the meaning of up to 60 words you have never seen before. This means that knowing only 1000 words helps you guess up to 65000 German words. Doesn't seem that frightening now, right?

Let's naturally start with "Hallo" which means "Hello" in German. This is one of the most known words in German and a great way to start a conversation with someone from Germany. Click play below to listen to the actual pronunciation:

Love is a universal feeling and we definitely had to talk about it here. German people have a lovely way of saying they love someone or something through the word "Liebe". Hear it in action here:

When there's love, there's definitely happiness. We are all chasing "Glück" as German speaking people would say. Listen closely and you might just get some “Happiness” in your life today:

Let's talk pets. There are two types of people in the world: cat people and dog people. We are going to talk about cats first or how people in Austria would say: "Katze". Listen to how it sounds like:

But let's not forget our lovely and loyal companions, dogs. A dog in German is "Hund", a really useful word for dog lovers worldwide. Here is how you would pronounce it:

Now it is time to smile or how someone from Germany would say "lächeln". Smiling makes us happy and helps us stay healthy, so that's why we all need to smile every day. Here's the German pronunciation:

Next, let’s see how people in Germany say “German”. The correct answer is "Deutscher". Listen to how a German speaker would pronounce it:

Yes, we have arrived at number 8 where “yes” is the subject to be discussed. German speakers say “yes” by simply saying "Ja". Enhance your understanding by listening to how a person from Austria would pronounce it:

Thank you for reading this far or should I say "Thank you" as they say in German. Here's a native speaker thanking you in German:

No polite conversation can end without a good old goodbye or "Goodbye" how German people usually say. Now it's time for a delightful German voice to say "Goodbye" to you:

Online language courses nowadays are fun, effective, affordable and use the latest technology to teach you a new language. This makes them a great solution to build your vocabulary. Meet Mondly, one of Apple’s best new apps of 2016 helping millions of people around the world learn a language. Our expert linguists have selected the most common German words so you start by learning what’s really important. No more learning random words you will probably never use in real life.

Each Mondly lesson revolves around a certain theme or situation: from family to colors to animals or shopping related lessons. You quickly get immersed in different situations like ordering food in a restaurant, booking a hotel room or having a casual talk with a native speaker you’ve just met. Organizing the lessons into themes makes learning German words a lot easier by creating powerful associations in your brain.

It’s been proven that you learn any language faster when you hear natives speak. That’s why our linguists have made listening to natives an essential part of the learning experience. All phrases within the app are recorded by professional German speakers so you can sit back and absorb the correct pronunciation of the most common German words effortlessly.

Now, let’s explore the ultimate goal of learning German: having real conversations. That’s exactly why we’ve made speaking exercises an essential part of our lessons so you can practice the cool German words you just learned. You have to try our Voice Chatbot, a computer program so advanced you can actually have an intelligent conversation with. Just engage in a conversation and you get asked questions, you respond and the Chatbot understands what you're saying and continues the chat. It’s a remarkable technology that made millions of people fall in love with Mondly. 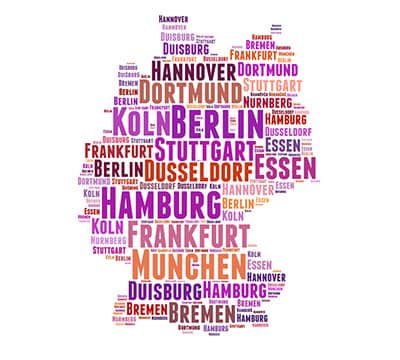 The German language has a reputation for having some of the longest words in the world. This is mainly because German speakers make use of compound words to express entire sentences. This is particularly true for commercial and Government related terms. That’s why, on average, a German word has over 10 letters.

The longest German word in history has 79 letters and is “Donau­dampfschiffahrts­elektrizitäten­hauptbetriebswerk­bauunterbeamten­gesellschaft”. The word consists of over 10 words if you translate it in any other language and it refers to the Association for officials subordinated to the head office management of the Danube steamboat electrical services. Crazy, right? However, this is one of the most uncommon German words. One of the longest and most common ones is “Rechtsschutzversicherungsgesellschaften” which refers to insurance companies providing legal protection. The word has “only” 40 characters and it is included in the Guinness Book of World Records as being the longest German word in everyday use.

With such words there’s no wonder why the famous American writer, Mark Twain, once joked that “some German words are so long that they even have a perspective.”

The benefits of learning the most common German words first

Starting with the German basics means you will begin by learning the easiest words first and gradually increase difficulty. This way you will feel great while learning and see how your language knowledge broadens.

Have basic German conversations in no time

You'll be able to speak to someone from Berlin or Vienna about regular topics like weather, politics or family. This will make you confident in your German skills and eager to learn more.

By learning the most common German words first you are learning the smart way. Why learn the most unusual words in German when you might never use them in real life?

You improve your German vocabulary

Each new German word you learn piles up until your vocabulary builds stronger and stronger. Each lesson gets you one step closer to fluency.