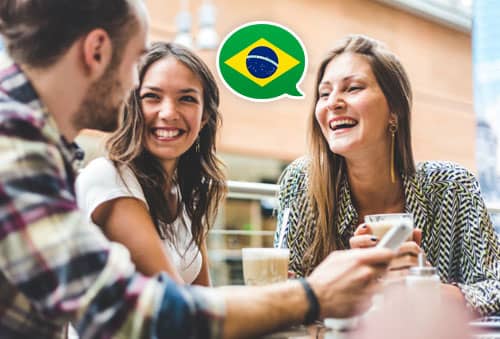 Discover how to speak Portuguese fluently

Most high school or regular Portuguese courses start by teaching you dull grammar rules and complex language notions. There has to be a better way! We, at Mondly - the language app loved by millions of people worldwide, take an opposite approach. Our language experts care deeply about your ability to have real conversations in Portuguese as fast as possible. That's why, rather than bombarding you with complex notions in the beginning of your course, we start by involving you in a real conversation. Through this approach, you will be able to have your first Portuguese conversation after only 5 minutes of using our app. Encouraging, right?

Our linguists have also identified one of the major secrets of how to speak Portuguese: listening to native speakers in a natural setting. Because our brain is wired to absorb the information we hear, our experts made listening an essential part of learning Portuguese. As a result, during all our lessons you will hear natives speak in Portuguese clearly, correctly and in context. This way, you will pick up the natural Portuguese pronunciation of core words effortlessly.

The most important part of learning Portuguese is getting a chance to practice what you learned by speaking the language. Otherwise, it’s all lost, like most of what we’ve learned in school. That’s exactly why our language experts have included Portuguese speaking exercises in every lesson. No need to find a Portuguese friend to help you rehearse. No need to go to a Portuguese speaking country. How can this be possible? We have created a high-tech computer program you can use to have a smart conversation with (really!). We call it the Mondly Chatbot. Sit back and it engages in a conversation with you using a friendly, native Portuguese voice. Don’t be shy: respond to its questions or even ask it one. Like magic, it will understand what you are saying and respond like a regular person would. No wonder millions of people around the world have already tried our Chatbot to learn how to speak Portuguese.

Meet Mondly VR, the first virtual reality application that helps you learn to speak Portuguese. Put your VR headset on and feel immersed in a world of languages. Order some chorizo in a restaurant in Porto, have an exciting Portuguese conversation in a train going to Rio de Janeiro or check into a hotel in São Paulo. It’s the closest thing to being there and that’s exactly what makes it so effective in learning Portuguese.

Remember that deer in the headlights feeling when someone asks you a question and you desperately dig through your memory trying to figure out what to say in response? In VR, you learn how to speak Portuguese by practicing the same situations in the comfort of your own home. Practice as many times as you like in a safe environment and get instant feedback until you get it right. As a result, you’ll gain the confidence to apply what you have learned in the real world. Ultimately, Mondly is all about teaching you how to speak Portuguese so you can have real life conversations with natives. No doubt about it, Mondly VR supercharges your learning and makes learning to speak Portuguese extremely effective. 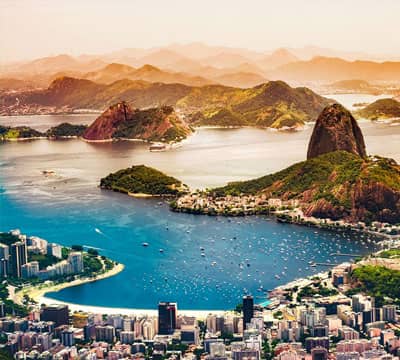 Portuguese is the 3rd most widespread European language worldwide. Just behind English and Spanish, it’s spoken by around 250 million people on 4 continents. You probably know that both people in Portugal and Brazil speak Portuguese, but can you name another country where Portuguese is popular? We’ll help you out. For example, there are over 5 million Portuguese speakers in Africa, in Mozambique and Angola. Surprisingly, there’s a region in Asia where Portuguese is still an official language. Can you guess which one? It’s Macau, an autonomous territory in East Asia, which was a former Portuguese territory until 1999 when it was handed over to China.

The Portuguese language is a soothing, romantic language like French, Romanian, Spanish and Italian. It originated in the Iberian Peninsula after the Romans conquered it about 2000 years ago. Having an opening to the Atlantic Ocean, Portugal becomes one of the leading countries in the race to discover new lands in the 15th century. One of its first discoveries is South America where the Portuguese colonized what would soon become the largest Portuguese speaking country in the world, Brazil. Nowadays, despite some minor differences in pronunciations and grammar, knowing Portuguese will help you get along in any Portuguese speaking country.

Being able to speak with over 260 million Portuguese speakers

Portuguese is the 6th most spoken language worldwide, so you'll definitely have a lot to gain by learning conversational Portuguese. For example, you'll be able to interact with people anytime you visit Brazil or Portugal.

Wherever you plan to travel to São Paulo or Lisbon , speaking Portuguese will enhance your experience significantly. You will be able to experience Portuguese speaking countries like a native and have an authentic experience in the process.

Speaking Portuguese can save your career

Studies indicate that being bilingual or a polyglot increase the grey matter in your brain. This means that speaking Portuguese makes you smarter than you currently are. So, what are you waiting for?